Only issue I have with these is if you only put two markers down, the original marker becomes inaccurate. For example, let’s say I have a song that goes from 100bpm to 67bpm. If I put a second market at the 67bpm section, my 100bpm portion of the track is now being gridded at 99.2bpm, which throws off that portion. I think the second marker shouldn’t affect the bpm of the first at all, and should only change the portion after the marker as it looks like it’s supposed to do in the video.

Current workaround is to actually place TWO markers. Place 1 at the end of the 100bpm section in my example, and place another at the beginning of the 67bpm portion of the track. That way only the middle section gets changed, and the others stay on beat.

I can confirm - I have the same issue.

Are these straight switches from BPM A to BPM B?

Are these straight switches from BPM A to BPM B?

The former. I think you’re going to have a very tough time gridding funk/tracks recorded live. Granted, none of the other competitors can still get that right

BUT HOLY CRAP WE FINALLY HAVE FLEXIBLE BEAT GRIDS!!!

How to grid a disco track 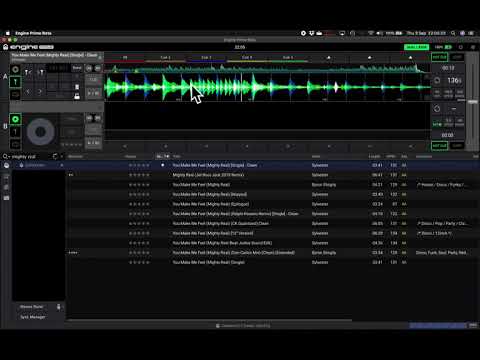 none of the other competitors can still get that right

Well there is Ableton Live. Although strictly speaking it’s not “DJ software”, it does have a crossfader and cueing.

When a track is imported, it will get warped, which involves the software automatically placing beat markers along the whole length of the track - very accurately - and then aligning those markers (and the audio) with the preset bar/beat grid.

So not only is it capable of doing this all by itself with little or no human intervention, it is also very easy to adjust, if required.

Well there is Ableton Live

This is news to me. I use Ableton and that hasn’t been my experience.

I still have to manually pull the transient markers to the grid to warp the track.

Ableton will guess where the transients are but will not snap those to the grid automatically…this has been my own observation.

If you’re only placing two markers, the BPM between them will be inferred by the amount of beats between them. Basically # of beats / length = BPM. If the BPM is coming out differently, it may be because may be a beat / bar off. Can you confirm that the grid is correct through out the entire track?

I’ll use an example with an 8-bar intro with the transition beginning on the 33rd beat:

Let’s say this intro is 100bpm and it transitions to 70bpm after the intro.

HOWEVER, if I put THREE markers - one at the beginning of the intro, one at the end of the intro (on the 33rd beat), and one at the beginning of the 70bpm portion of the track, both the 100bpm intro and the 70bpm section will be 100% correct. Essentially, the second beat marker is only there to prevent the 100bpm section from going off beat; I don’t care what happens in between markers 2 and 3 because that’s when the track is transitioning from 100bpm to 70bpm. I only care about the intro (marker 1) and the 70bpm part (marker 3).

You need to, in essence, lock the region that is 100bpm, so yeah extra marker at the end of 100bpm before the transition starts.

If I put 2 markers, one at the beginning of the song

if I put THREE markers - one at the beginning of the intro,

It is useless to place the anchor at the beginning of the song.